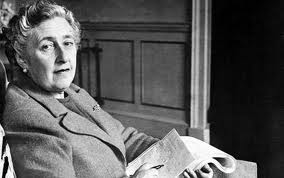 Excerpt from the Introduction of her novel, Passenger to Frankfurt:

The first question put to an author, personally, or through the post, is, “Where do you get your ideas from?”

The temptation is great to reply, “I always go to Harrods,” or “I get them mostly at the Army & Navy Stores,” or, snappily, “Try Marks and Spencer.”

The universal opinion seems firmly established that there is a magic source of ideas which authors have discovered how to tap. One can hardly send one’s questioner back to Elizabethan times, with Shakespeare’s

Tell me, where is fancy bred,
Or in the heart or in the head,
How begot, how nourished?
Reply, reply.

You merely say firmly, “My own head.”

That, of course, is no help to anybody. If you like the look of your questioner, you relent and go a little further.

“If one idea in particular seems attractive, and you feel you could do something with it, work it up, tone it down, and gradually get it into shape. Then, of course, you have to start writing it. That’s not nearly such fun–it becomes hard work. Alternatively, you can tuck it carefully away, in storage, for perhaps using in a year or two years’ time.”

A second question–or rather a statement–is then likely to be, “I suppose you take most of your characters from real life?”

So the author has produced the ideas, and the characters–but now comes the third necessity–the setting. The first two come from inside sources, but the third is outside–it must be there–waiting–in existence already. You don’t invent that–it’s there–it’s real.

You have been perhaps for a cruise on the Nile–you remember it all–just the setting you want for this particular story. You have had a meal at a Chelsea cafe. A quarrel was going on–one girl pulled out a handful of another girl’s hair. An excellent start for the book you are going to write next. You travel on the Orient Express. What fun to make it the scene for a plot you are considering. You go to tea with a friend. As you arrive, her brother closes a book he is reading–throws it aside and says, “Not bad, but why on earth didn’t they ask Evans?”

So you decide immediately a book of yours shortly to be written will bear the title, Why Didn’t They Ask Evans? You don’t know yet who Evans is going to be. Never mind. Evans will come in due course–the title is fixed.

Dame Agatha Mary Clarissa Christie, DBE (née Miller; 15 September 1890 – 12 January 1976) was a British crime writer of novels, short stories, and plays. She also wrote six romances under the name Mary Westmacott, but she is best remembered for the 66 detective novels and more than 15 short story collections she wrote under her own name, most of which revolve around the investigations of such characters as Hercule Poirot, Miss Jane Marple and Tommy and Tuppence. She also wrote the world’s longest-running play The Mousetrap.

Born to a wealthy upper-middle-class family in Torquay, Devon, Christie served in a hospital during the First World War before settling into married life with her first child in London. Although initially unsuccessful at getting her work published, in 1920, The Bodley Head press published her novel The Mysterious Affair at Styles, featuring the character of Poirot. This launched her literary career.