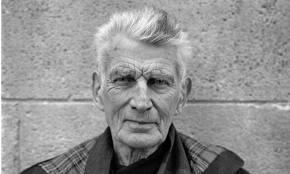 “We are all born mad. Some remain so.”

“All of old. Nothing else ever. Ever tried. Ever failed. No matter. Try again. Fail again. Fail better.”
from Worstward Ho

“You’re on Earth. There’s no cure for that.”

“The tears of the world are a constant quantity. For each one who begins to weep somewhere else another stops. The same is true of the laugh.”
from Waiting for Godot

“The end is in the beginning and yet you go on.”
from Endgame

“I always thought old age would be a writer’s best chance. Whenever I read the late work of Goethe or W. B. Yeats I had the impertinence to identify with it. Now, my memory’s gone, all the old fluency’s disappeared. I don’t write a single sentence without saying to myself, ‘It’s a lie!’ So I know I was right. It’s the best chance I’ve ever had.”

Samuel Barclay Beckett (13 April 1906 – 22 December 1989) was an Irish avant-garde novelist, playwright, theatre director, and poet, who lived in Paris for most of his adult life and wrote in both English and French. His work offers a bleak, tragicomic outlook on human nature, often coupled with black comedy and gallows humour.

Beckett is widely regarded as among the most influential writers of the 20th century. Strongly influenced by James Joyce, he is considered one of the last modernists. As an inspiration to many later writers, he is also sometimes considered one of the first postmodernists. He is one of the key writers in what Martin Esslin called the “Theatre of the Absurd”. His work became increasingly minimalist in his later career.

Beckett was awarded the 1969 Nobel Prize in Literature “for his writing, which—in new forms for the novel and drama—in the destitution of modern man acquires its elevation”. He was elected Saoi of Aosdána in 1984.

4 thoughts on “The Writer Who Is Both There and Not: Quotes from Samuel Beckett”