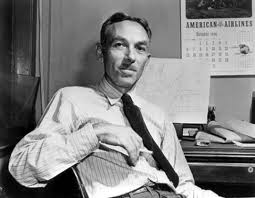 At seventeen, the future is apt to seem formidable, even depressing. You should see the pages of my journal circa 1916.

You asked me about writing–how I did it. There is no trick to it. If you like to write and want to write, you write, no matter where you are or what else you are doing or whether anyone pays any heed. I must have written half a million words (mostly in my journal) before I had anything published, save for a couple of short items in St. Nicholas. If you want to write about feelings, about the end of summer, about growing, write about it. A great deal of writing is not “plotted”–most of my essays have no plot structure, they are a ramble in the woods, or a ramble in the basement of my mind. You ask, “Who cares?” Everybody cares. You say, “It’s been written before.” Everything has been written before.

I went to college but not direct from high school; there was an interval of six or eight months. Sometimes it works out well to take a short vacation from the academic world–I have a grandson who took a year off and got a job in Aspen, Colorado. After a year of skiing and working, he is now settled into Colby College as a freshman. But I can’t advise you, or won’t advise you, on any such decision. If you have a counselor at school, I’d seek the counselor’s advice. In college (Cornell), I got on the daily newspaper and ended up as editor of it. It enabled me to do a lot of writing and gave me a good journalistic experience. You are right that a person’s real duty in life is to save his dream, but don’t worry about it and don’t let them scare you. Henry Thoreau, who wrote Walden, said, “I learned this at least by my experiment: that if one advances confidently in the direction of his dreams, and endeavors to live the life which he has imagined, he will meet with a success unexpected in common hours.” The sentence, after more than a hundred years, is still alive. So, advance confidently. And when you write something, send it (neatly typed) to a magazine or a publishing house. Not all magazines read unsolicited contributions, but some do. The New Yorker is always looking for new talent. Write a short piece for them, send it to The Editor. That’s what I did forty-some years ago. Good luck.

Elwyn Brooks White (July 11, 1899 – October 1, 1985), usually known as E. B. White, was an American writer. He was a contributor to The New Yorker magazine and a co-author of the English language style guide, The Elements of Style, which is commonly known as “Strunk & White.” He also wrote books for children, including Charlotte’s Web and Stuart Little.